ALT–HIGH: 6 Keys to Being at Peace in the Middle of Mental and Physical Unrest During a Trump Presidency 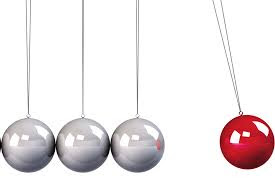 Alt-right (alternative right) is the new ideology born out of a changing presidential administration that promotes the swing to a more far right conservative way of thinking towards white supremacy. Whether done advertently or inadvertently, the climate of the president-elect Trump is turning back the clock on America’s progress of racial and gender equality. For those who are threatened by the transiting of a homogeneous white majority in the US to a more diverse populous, voting for Trump and the alt-right movement is the only way for them to resist what has been predicted to be the end of a ruling class of elites whose prominence pre-dates the discovery of America. Today, the same sentiment regarding immigrants, elite dominance and controversy is occurring in nations across the globe such as England, Brazil and the Philippines.

Interestingly, when we strive to be supreme we want to dominate. It is in-born within our society. Many want to be supreme, on top, the best and the only, in whatever they do and look down on others who are below them that are lacking in goods or qualifications. It makes one feel special attracting heightened attention and a certain privilege treatment. We watch sports games and want our teams to be champions forever and we pay a pretty penny for it, even though, we know that no one is a champion forever. In sports, as in life, no one or nothing reigns supreme forever. Whether it was the Pittsburg Steelers, the LA Lakers or New York Yankees, each team had long consecutive championships, but failed to last forever. Quite, frankly, our world was not set-up that way as there has always been a time when the energy of power sweeps from one end of the spectrum to the other like the law of conservation and momentum. Throughout history, every empire has fallen, the Persian Empire, the Roman Empire, the Mongol Empire, the Byzantine Empire and others have fallen and new empires emerged. Every race has been slaves including white people who were slaves for 1500 years in Europe.

As a baby-boomer, who grew up in the era of the Civil Rights movement, the current spike in a climate of overt hate and racial discord is nothing new, but a simple reminder that even though the masses have somewhat moved in a more positive direction, there are those who don’t feel good about this shift in population because it means a shift in power. They are threatened and feel that they will not be treated the same by others in an exchange of power predicated on a hierarchical system based upon racial discretion. Trump is their “trump card,” the joker, who spoiled what progress is certain to obtain. 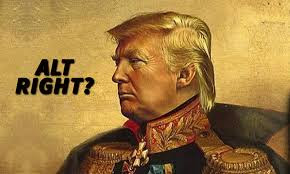 I recall the time of former Alabama Governor, George Wallace, and how outspoken he was regarding his support of racial segregation, often times speaking without censorship and condemnation. Backed by the Ku Klux Klan, he won the governorship in 1962 running on a platform of racial separatism. He is best remembered for standing in the door to prevent two black students, James Hood and Vivian Malone, from entering the University of Alabama with the assistance of the National Guard. As a very young girl, I remember watching the scene on television and thinking how can someone be so mean? Just as today, kids across the nation are watching history repeat itself through the antics and disingenuous behavior of some of those backing Donald Trump’s presidency. After serving four terms as governor, Wallace unsuccessfully ran for the presidency of the United States in 1976 losing to Jimmy Carter. 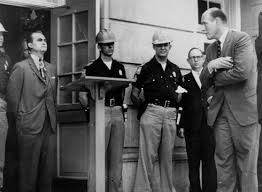 Yet, through the hailstorm of bigotry, negative television news programming of killings, water spraying and dog biting of black protestors, African Americans still found solace and happiness. How we did this is equally as important to many today as yesterday. Below are some old and new things one can do to eliminate a state of depression:

1.)  Stay connected to love through the family unit and your local community of friends that resonate with love and compassion.
2.)   Maintain a belief in God or whoever your higher power is because that’s where your inner strength and power is coming from. Your faith will provide the mental calmness and patience necessary to sustain you through these times.
3.)  Change your perspective about today’s crisis. The current election is a reflection of how some of the masses were really thinking. The truth has emerged and that’s a good thing. We live in a democratic society and many, swept under the carpet, are letting their discontent be known because they now feel safe to do so. Additionally, it shows us how we are being triggered by their discontent and it allows us to become very clear about what we are really wanting for our nation while paving the way for future solutions that are inclusive of all.
4.)  Keep your eyes on the prize. What we really want is to feel good, live in peace and harmony and experience love. In your mind’s eye, imagine a world that is peaceful and loving, where everyone is happy, getting along and living side-by-side.
5.)  Pray or meditate and use your intuition as your guiding light. Things that are being reported to us by the media are not always true.  The more you pray or meditate, the more you become aware of your intuitive faculties and see through the illusion.
6.)  Use this time to become more self-aware to discover our eternal being as having the same qualities as God. 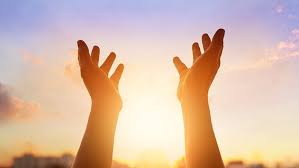 Finding the space between anger and fear in a chaotic society can be a daunting task, however, if we choose to “alt-high,” we will find the peace we’ve been wanting, sitting there waiting for us. Alt-high is alternative to the more high. It is striving to act your highest at all times even when things don’t seem to be going your way. Alt-high does not mean being complacent, but it means asking the question, “What would God do?” You’ll know by the way you feel, if you’re going in the direction God would take. Positive change may not come over night, but when it happens, it does so magically.  One day, we will look back on these times and see how many pieces of the puzzle had to fit perfectly for a shift to a society rid of a fear consciousness.

At the end of the day, love really does conquer hate. Although his legacy of racial scorn is in the history books, Governor George Wallace became a different man later in life and was voted Governor of Alabama in 1971 with overwhelmingly black support in building a new image that courted blacks. After a shooting that left him in a wheelchair, he asked for forgiveness from Civil Rights leaders for his earlier actions promoting white supremacy and racial divisiveness. He became self-realized with a new awareness of self that could have precluded his mistreatment of other human beings, but was necessary for his own evolvement. 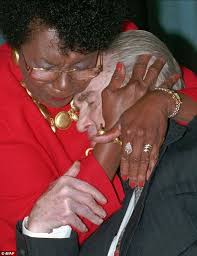 Posted by Anchored in Spirit at 6:57 AM No comments: