Messages from the Angelic Realm

Our Guardian Angels and Spirit Guides are around us all the time. In fact, we are never alone from the time we take our first breath to our last. Although, especially in times of crisis when we feel the greatest intensity of feeling alone, our limited ability to "see beyond" the physical causes us enormous pain.

Our perception of the world we live in is highly disguised by our belief patterns that were handed down by our parents, ancestors, teachers and the society in which we live. Our programming does not support our multisensory perception that allows us to connect with our loving Spiritual Guides and Angels with relative ease and certainty. Staying within the comfort zone of our five senses limits us and keeps us comfortable but at the expense of spiritual growth. Knowledge of the celestial realm of Archangels, Guardian Angels and Spirit Guides will help us navigate through the darkest hours, bringing light to chaos and confusion.

We first learn about the Angels when we are children. Some children actually feel as though they see Angels and Spirit Guides or even fairies. Children tell you about a deceased relative they encountered or an imaginary friend who comes to play with them. Even more remarkable are children who can tell you what they knew about you in a past life. Then confusion sets in. Sometimes its not accepted to have imaginary friends while other times we are encouraged to use our imagination. When our parents read us fairy tales and stories, we use our imaginations to picture and experience the story as it is read or told. They tell us about the Fairy Godmother in fairy tales, the Tooth Fairy, when we loose a tooth and Santa Clause during Christmas. These imaginary characters are encouraged. In the case of Angels and Spirit Guides, however, often it is shunned. Yet, if you have ever attended Sunday school, you learned about God's many messengers called, "Angels." As a child, I always thought about Angels and sometimes I would "imagine" them speaking to me, however, it was my secret - I would never let anyone know. Was I crazy? 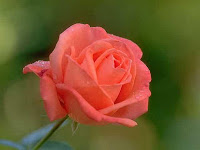 All we have to do is ask and they will deliver. I received many messages from the Angels about my mother before and after her transitioning. I even had an encounter at the hospital with an Earth Angel. After my mother transitioned, I began to notice all kinds of messages from her.  As she laid peacefully in her hospital bed inside her bedroom, my siblings and I placed four coral roses on her chest. I sensed that although she had departed from her physical body that she was still around. The beautiful roses came from her front garden and represented the love of her four children.


Soon thereafter, I asked her to give me a sign that she was still around "in spirit" and that she was fine. That's when I noticed the presence of roses that were everywhere.  Before, I had never really noticed roses. Yes, I may have walked past a rose garden and noticed a beautiful rose, but now, somehow the roses that I noticed spoke to me. It started with my friend, Gary, who posted a message on his Facebook page that my mother had passed away. His posting displayed a picture of an Angel on a wall covered with roses. It was one that he selected after viewing hundreds of Angel images. Then, when I returned home to San Francisco, I attended the Global Exchange Human Rights Awards. At the end of the awards ceremony, I was called to the stage and made the last statement to a crowd of about 500 attendees. As I departed the stage, out of nowhere, I was approached by a woman who said that she felt compelled to give me a scarf as a gift. The sheer green scarf was from Pakistan, but their was something that caught my attention. After looking at the detail in the scarf, it was outlined in white with roses along its edges. Was this a sign that mom was around? (Please note that even though I saw roses many times this does not necessarily mean that mother was around, but I was being directed to roses out of a million other stimuli in my environment.)

One of the most profound experiences, however, occurred while traveling through the California Redwoods to Victoria, BC. My friend, Lynda, had set-up the trip a year prior, booking hotels and car rental services. A former trial lawyer, she is very detailed oriented and organized.  Lynda booked a beautiful Victorian bed and breakfast inn at a town in Ferndale, California. When we arrived, we were led to a double occupancy room that was designed with roses, including the wallpaper, rug and even the curtains had rose designs and patterns. It was the only bedroom that had an adjacent balcony that was lined with huge rose bushes. Our assigned bathroom, featured a rose theme from the shower curtain, to the wallpaper and rugs, all designed with rose patterns. I mentioned to my friend that my mother was around, but she dismissed it. 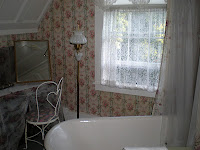 The bedroom and bathroom inside the Victorian bed and breakfast inn.

Common logic assumes that if you stay at a Victorian Inn you will encounter roses. Roses were frequently used by the elite during the Victorian period to secretly communicate different meanings depending upon its color, so Lynda was not as impressed as I was. She shrugged it off until we went to get something to eat in the small quaint town. We were told about a couple of places to dine by the Inn Keeper. She told us about a Thai restaurant about a block down the road and a pizza place that was pretty good. We walked to the Thai restaurant, but I decided against it so we continued to walk down the street. As we walked up the block, suddenly a woman with a beautiful smile walked towards us from the pizza restaurant. She was excited and was running hurriedly to her car that was parked out in the front. She stopped us to tell us about the great food that the pizza place offered, including the most delicious meal that was an eggplant Parmesan in the "shape of a rose." This was not a coincident for the timing had to be just right for the woman to be exiting at the exact time we walked to the pizza restaurant. Lynda was in shock and she finally believed that mother was in fact, around. We decided to eat there and ate the most delicious eggplant Parmesan I had ever tasted.


Since then, I continue to get messages from my mother, like the time I traveled to Los Angeles and rented a car that was assigned to me with the same color, "white." and tag number as my mother's. By the way, the name of the hotel I stayed in was the "Angeleno" (my mother's name was Angelyn, changed by her from Angeline) on Church Lane. Angels direct you to the messages but you must become aware and notice without trying. You will know because you'll feel it in your heart. This is how our Angels communicate to us. In Doreen Virtue's books "Signs form Above" and "Divine Guidance," she mentions some of the the signs that include certain seeing coins, numbers, and feathers that may be in your path. These symbols are indications of the presence of someone or relay a message such as that we are moving in the right direction.

In these tumultuous times and an evolving world, knowing the role of our friends in the celestial realm will help us navigate through desert storms. Although we have free will, Angels and Spirit Guides give us messages that help us stay on our soul's path this lifetime.  It is important that our children as well as ourselves know that they are always around to help us. That is one of the reasons I was inspired to create the "Angels and Spirit Guides Coloring and Activity Book" for ages 5+.  This project is a great gift for all who seek Divine guidance, wisdom and compassion. Readers learn about the Archangels, Guardian Angels and Spirit Guides, the difference between them and the specific roles they play in our lives. Plans are for the 56-page book to be printed and distributed by this Christmas. My greatest desire is for the book to be distributed FREE to children in hospitals and hospices as well as to the underprivileged. With help from the Angels all things are possible! 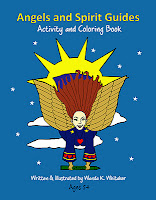 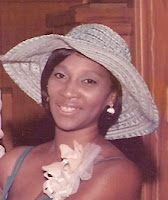 Dedicated to you, Mom! I love you!