A Return to Nature In the Coming Age

Walking amongst the tall California Redwoods this past August with my friend, Lynda Martyn, I gained insight into why the Native Americans had such a deep love and respect for nature. Those gigantic trees emitted such a healing loving energy that I hugged a couple of them and told them how much I appreciated them. It reminded me of how the author and nature lover, Henry David Thoreau, must have felt when he wrote "Walden." The book which reflects his experience living a simple life at Walden Pond and going "Into the Woods" is only one of many of the literary representations of the transcendental movement. Other transcendentalists such as Ralph Waldo Emerson, who believed that "Nature is the symbol of the Spirit," were simply 19th century soul searchers who looked for spirit in matter much as today's truth seekers look for the Divine in everything and everybody. Emerson philosophizing on nature wrote, "The lover of nature is he whose inward and outward senses are still truly adjusted to each other; who has retained the spirit of infancy even into the era of manhood. His intercourse with heaven and earth, becomes part of his daily food."

Nature is the greatest conductor of Divine energy that we can plug into. That is why inventors such as Nikola Tesla came up with the vision for the AC (alternating current) induction motor while walking in a park, spiritual teachers such as Jesus went into the garden to pray, Buddha attained his enlightenment under the Bodhi tree and even Grace A.C. Bhaktivedanta Swami Prabhupada started the Hare Krishna movement in America standing beneath an oak tree in NYC.


The native indigenous peoples of the world understand that Earth is a living body that houses the Great Spirit. As a living body, the waterways are its blood, the spinning iron molton at it's inner core is its heart, the trees and their many branches are its nervous system, and the soil its skin. We, the people and all the animals, are its billions of cells operating as separate units, but still a part of the larger Earth community. The Earth is made up of 75% water and so are we. Without water, there is no human life, as we know it, on Earth. She is our mother who nourishes us and supplies us with our basic material needs - food, shelter and clothing - as well as our medicines to keep us well and alive. Trees produce the oxygen we need to breath in and we produce the carbon dioxide they need to survive with each exhalation we take. Yet, in our ignorance, we have little to "no" respect for all of what the Earth is to us. When I first heard of the transcendental movement in high school, I could hardly understand why this man went into the woods. What for? As an urban born dweller, I could not comprehend his thirst to go beyond his five senses to experience solitude and simplicity in the woods. My senses were more in tune with the frequencies of the radio playing the latest "beats" and not the natural frequencies of the forests that were all around me. It was not until my early 30's, when I moved to California from Maryland, that I acquired a passionate interest for nature and during my 40's an inclination towards inner peace and mental stability.

Just as Earth has a body, it too, has a consciousness. Watch nature and you will begin to know its messages that forewarn us when it needs to yawn, forming hurricanes and tornadoes or when it stretches, with earthquakes. You will notice that just before anything happens, the animals disappear. Birds and bees cease flying, wild animals go for cover gathering their tribe and go into hiding and our household pets begin to act strange. Look up at the sky and dark clouds form to warn us of an upcoming storm. Just before the rare earthquake and Hurricane Irene touched ground in Maryland this past August, I noticed that there were no squirrels running up the trees. I didn't hear the buzzing of the bees nor the chirping of the birds. Later, I watched the sky, without birds in flight, and saw how mysterious it appeared displaying rows of vivacious orange and purple in some areas, cumulus clouds covering clear skies in other areas and patches of dark stratus clouds were woven in as though the patchwork was telling a grave story of great human interest.

Not only do we receive messages from nature, there are also spirits overseeing and protecting nature. Tree spirits can often be literally seen in trees and if you listen close enough they will share their wisdom and healing powers with you.


The Earth runs in rhythmic cycles, some small and others large. For example, every 52 days she harvests new crops, every 2,000 - 2,300 years she births a New Age, every 11,000 years she shifts poles (geomagnetic pole reversal) and every 26,000 years she aligns with the sun at the equator (Precession of the Equinoxes). We are now approaching the year 2012 which marks the Age of Aquarius. The Age is symbolized by the feminine WaterBearer archetype with the pouring of water out of the clay jug onto the Earth's surface marks a baptism. The New Age of truth and brotherhood prevails over the old paradigm of ego, greed and separation. How amazing is it that this period coincides with the current "green movement" and more notably the return to organic farming from farmers markets to community food gardens as well as more "open space" in cities whether its a block long or acres?

This evolutionary process is part of an ever expanding evolving universe. As with any growth period, positive transformation requires going past a comfort zone. We are experiencing this right now. During this transformation period, Earth's climate becomes acute and off-balance. It must release its toxins from its system. Its outer body, we call the atmosphere, has to protect it from the solar flares of its own mother, the Sun. Humanity is experiencing the effects of catastrophic weather conditions as many are now living without the comforts and luxuries of their homes. Manmade satelites are being hit by "cosmic slop" and fall from the sky indicative of being in the right place at the wrong time.

As the Earth changes, we too, are changing. We must. That's because humans are evolving with the Earth. For decades we have been out of tune with the natural frequencies that transmit nourishment for the expansion of our souls. In order for us to grow we must return to nature and love her as our mother and our teacher. As we watch over her and listen to her, we will learn from her. Countries such as Ecuador understand this more than any other country. Ecuador and Bolivia ar the only countries, thus far, that have passed a rights for nature bill acknowledging that nature in all its forms has a right to exist, persist, maintain and regenerate its vital cycles. What most people don't know is that Ecuador's Constitutional Assembly got its legal assistance from a Pennsylvania based group in America. The recently published book, "The Rights of Nature," co-developed by Global Exchange, Council of Canadians and Fundacion Pachamama, explores this shift and reveals what's taking place legally and culturally to formulate a more intimate relationship with nature. 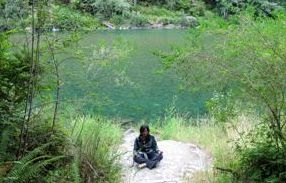